Knowing that man constantly wants to break through the universe and know other planets, one can imagine that we have already seen everything on our planet, right? Not really! Our planet is huge and, as much as we have seen many things, gone from north to south, east to west, there are still some places we can’t explore.

So many places on the planet are still waiting to be pioneered, and so many species and organisms that still need to be documented. In many cases whether or not to explore certain places does not depend solely on the curious instinct of scientists. Political conflicts, climate issues and other local conditions are just some of the reasons why some places remain so long without human contact. Check out 7 places that have not yet been explored by man.

If you take a map of Australia, you will see that almost all major cities are around the coast. And that has an explanation. Although it is one of the most technologically developed countries, much of Australia’s land mass is inhospitable and empty, especially in the central region. Cape Melville is one such area. The mountain range, located in the far northeast of the country, is sparsely populated and has been largely removed from the rest of the world. This is because, until 1978, no one knew of its existence. Due to the lack of accessibility, only a few research teams were able to visit the site to this day. The region is full of large rocks, dense forests and a heavy fog. It is definitely not one of the easiest places to explore.

Everyone knows that India is one of the most populous countries in the world and has a huge diversity of landscapes and ecosystems. But still, there are some places, especially in the northeast, that were almost always cut off from the rest of the country. This is due to its geographical location. Meghalaya is home to many underground caves and isolated ecosystems that have not yet been properly explored. Krem Puri is the largest sandstone cave in the world, and was only discovered in 2016. Another large cave, Krem Um Ladaw, was only found earlier this year. But that seems to be just the beginning, researchers believe there is a huge expanse of caves in Meghalaya. It will probably take some time to work it out.

It is no surprise that our country is on this list, after all, Brazil has one of the largest territories in the world. The Amazon forests, even in their enormous diversity, still have large unexplored regions, one of which includes a tribe that has never had contact with the rest of the world. Known as Javari Valley, the place is named after the Javari tribe. For a long time, the Javari resisted any attempt to contact the “white man,” and perhaps we should leave them that way. Considering that they are susceptible to various deadly diseases, against which we have developed immunity for some time. That is, a single contact with them could eliminate the whole tribe. And it’s very obvious that they don’t want to be bothered by anyone.

Son Doong Cave in Vietnam is one of the most magnificent natural formations in the world. Son Doong is also the largest cave ever discovered. In 2009, when it was discovered, some researchers even began to explore the region, but due to its extent, they only saw a part. In May of this year, a team of divers discovered a hidden channel that connects Son Doong to another cave. As they did not have the necessary equipment to clear the cave, they left without continuing the expedition. But they plan to return soon to find out how far the great cave system goes and the mysteries it holds.

Africa is not among the easiest regions to explore in the world, especially in the center. But as technology advanced, new features made it possible for almost the entire continent to be mapped. But still, some regions remain completely untouched by outsiders, and Monte Lico in Mozambique is one of them. In 2012, a researcher discovered, through Google Earth, an entire forest lined up in the Mount Lico crater. When a team of scientists went exploring in 2018, they found an intact ecosystem and several species never seen before.

Due to its large extent, some regions of Russia have not yet been fully explored. The Kamtchatka Peninsula is in the far east of the country and is one of them. The place was never really explored. Known as the “land of volcanoes”, Kamtchatka is full of hot springs, snow mountains. Not to mention a particular fauna and flora you won’t find anywhere else.

Fiordland is New Zealand’s largest national park, and also one of the most beautiful places in the country. Even though the park has some tourist attractions and even served as the setting for the movie Lord of the Rings , most of the territory is still unexplored. Due to its inaccessibility, inhospitable climate and the great extent it is difficult to explore all that is there.

And you, what did you think of these places ? Tell us in the comments and share it with your friends.

75+ Stylish Bathroom Design Ideas for the Fastest and Freshest Makeover 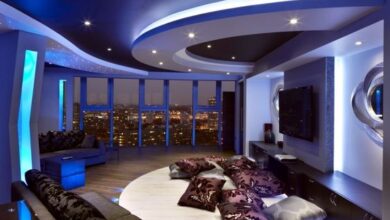 50+ Stunning Ceiling Design Ideas To Spice Up Your Home 2022

STUDY SUGGESTS ‘UNDERWATER CITY’ WAS NOT BUILT BY HUMANS